You are here:
LICHEN PLANUS

Lichen Planus is a chronic skin disease in which mucous membrane appears on the skin. The mucous membrane appearing skin looks like lichen; therefore, the name of disease is also Lichen Planus. However, it is very interesting fact about the disease is that it is not at all caused because of lichens. The exact cause of the disease is yet not discovered by medical science but it may happens because faulty working of immune system of human body. The reason behind the malfunctioning of immune system is still unknown. The patients’ skin suffering from Lichen Planus develop red rashes, which can cause inching and skin inflammation. 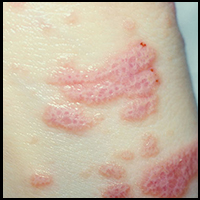 The disease affects mostly females as compared to males and in children the disease is very rare. Further, it can be also found the disease is more prominent among middle aged people. The disease is also very common among ladies suffering from hypothyroidism. The disease mostly affects the ankle and waist area of human body. During recovery the red rashes turn into blue-black or brownish coloring of skin. It takes long time to rid of such rashes even after recovery. The disease never gets transmitted by physical contact or due to sexual intercourse; therefore, a person living with the patients get affected by disease by any means.

As discussed earlier major cause behind Lichen Planus is not known; hence, the complete cure of the disease is not present. However, in treating this disease homeopathy treatment has shown the best results although the treatment and medication is given to patients for longer period. Vira’s Homeopathy Clinic is the place where the patients suffering from Lichen Planus can get complete treatment. Our doctors assure patients for permanent cure of the disease. Therefore, before providing any medication to patients our doctors go through the complete medical history of patients and do different tests to check the intensity of the disease.

Lichen planus can be part of Grinspan’s syndrome

The typical rash of lichen planus is well-described by the “5 P’s”: well-defined pruritic, planar, purple, polygonal papules. The commonly affected sites are near the wrist and the ankle. The rash tends to heal with prominent blue-black or brownish discoloration that persists for a long time. Besides the typical lesions, many morphological varieties of the rash may occur. The presence of cutaneous lesions is not constant and may wax and wane over time. Oral lesions tend to last far longer than cutaneous lichen planus lesions.

Oral lichen planus (OLP) may present in one of three forms.

The microscopic appearance of lichen planus is pathognomonic for the condition

Lichen planus may also affect the genital mucosa – vulvovaginal-gingival lichen planus. It can resemble other skin conditions such as atopic dermatitis andpsoriasis.

Rarely, lichen planus shows esophageal involvement, where it can present with erosive esophagitis and stricturing. It has also been hypothesized that it is a precursor to squamous cell carcinoma of the esophagus.

Clinical experience suggests that Lichen planus of the skin alone is easier to treat as compared to one which is associated with oral and genital lesions.

Care of OLP is within the scope of Oral medicine speciality. Currently there is no cure for lichen planus but there are certain types of medicines used to reduce the effects of the inflammation. Lichen planus may go into a dormant state after treatment. There are also reports that lichen planus can flare up years after it is considered cured.