You are here:
LEUCODERMA 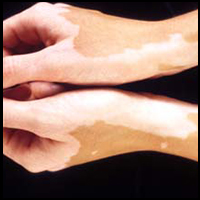 Although there is no permanent cure available for Vitiligo but can be found in several cases homeopathy proves to be best cure for the disease. Vira’s Homeopathy Clinic has best track record in providing best results in most of cases of Vitiligo.

Vitiligo generally appears in one of three patterns:


In addition to white patches on the skin, people with vitiligo may have premature graying of the scalp hair, eyelashes, eyebrows, and beard. People with dark skin may notice a loss of color inside their mouths.

Focal pattern vitiligo and segmental vitiligo remain localized to one part of the body and do not spread. There is no way to predict if generalized vitiligo will spread. For some people, the depigmented patches do not spread. The disorder is usually progressive, however, and over time the white patches will spread to other areas of the body. For some people, vitiligo spreads slowly, over many years. For other people, spreading occurs rapidly. Some people have reported additional depigmentation following periods of physical or emotional stress.

The diagnosis of vitiligo is made based on a physical examination, medical history, and laboratory tests.

A doctor will likely suspect vitiligo if you report (or the physical examination reveals) white patches of skin on the body-particularly on sun-exposed areas, including the hands, feet, arms, face, and lips. If vitiligo is suspected, the doctor will ask about your medical history. Important factors in the diagnosis include a family history of vitiligo; a rash, sunburn, or other skin trauma at the site of vitiligo 2 to 3 months before depigmentation started; stress or physical illness; and premature (before age 35) graying of the hair.